*Warning* This post contains pictures of my bare chest, although I did edit out the nipple to make it “work safe” for most. There is nothing salacious or lurid about the pictures. They are merely my medical experience. However, if you work for a church or a company with a zero tolerance policy, quit wasting company time and read this when you get home. 🙂

Radiation is a new experience for me. I was fortunate that I could avoid it when I had Hodgkin’s. Oh, I so wanted to avoid it this time. However, that was not to be. When I met with the radiologist, I was not convinced that I needed it. The doctor explained to me that the treatment plan was calculated at the beginning of treatment rather than the middle or end. This makes sense. Another way to look at it is that it is a prescription. You should not stop antibiotics as soon as your symptoms disappear. That is just a sign that they are working. You must give them the complete time to work. Once you are cured, then you can say that they worked.

Dr M. stated that there are certain factors where radiation is considered pretty much automatic. He checked off each reason:

Not what we were hoping, but it was what we expected.

Soooooo, I started all of the preparation for beginning radiation last Friday. The first part was to have a CT Scan and map the plane they were planning on radiating. They gave me a lovely gown.

I haven’t liked pink since I was 7. Now, I really fucking hate it.

They then showed me the women’s waiting room. At first I was confused, but having separate waiting rooms makes sense. Because we’re sitting around in robes, some might be very uncomfortable around the opposite sex. It’s kind of nice that someone thought of that.

They led me into a room with a CT Scan machine and a scary door. 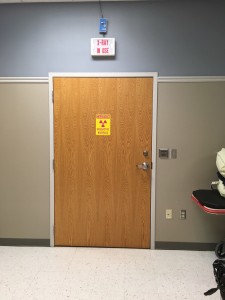 The first part of the preparation was to put me on the machine and create a special mold for my head and arms. This Vac-Lok cushion keeps me in the same position for each treatment. They had me lie down, raise my arms above my head, and turn my head away from the soon-to-be-radioactive breast. They pushed the material around me and hit the vacuum. It doesn’t look fancy, but it does hold me in place. Once I’m done with radiation, they’ll release the vacuum seal, clean it, and it’s ready for the next patient. 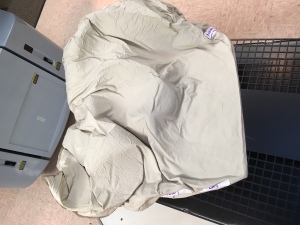 The next step was to line me up with the laser lights around the room. They are mounted on each wall to the side of the machine and on the ceiling above the machine. The radiation therapists drew some marks on my body level with the lights. They then placed a row of stickers, that had a piece of metal wire along the top, along those marks and laser lines to frame the radiation plane. The wire would show up on any images taken and allow the doctor to see exactly what was in my body in that area. He would be using these images to determine where precisely he was going to aim the radiation to avoid unnecessary internal damage.

You can see the lasers on my body in this picture.

There is the rows of stickers on my chest framing the radiation area. In the window, you can see my radiologist looking over my scans.

Once they had all of my insides mapped out, they drew on me in purple sharpie. Also, I was given two small tattoos—the size of a pinhole—on either side of my breast in the middle of the sharpie marks. I can shower, but I’m not supposed to scrub the sharpie off. However, the tattoos are there so if the sharpie comes off, they can line me up properly each time. It looked like they had done a ritual on me, but I was pretty confident all was well as there had been no chanting.

I labeled the scars because I know that is one of those things people are curious about. They’re obvious, but not maimed looking.

I had a brief consult with the radiologist after. He scheduled me for 28 total days of radiation. That’s Monday through Friday for 5 1/2 weeks. When I had asked him how he came up with that exact number, he straight-faced told me that he “just made it up.” It was at that moment I knew he was the right doctor for me.

I went in Monday for some x-rays. It is layer upon layer of information that the doctor wants. Oh, I’m not complaining at all. I’d rather that they had too much information than too little. However, it can be unnerving trying to figure out when I should be inwardly panicking when everyone’s so methodical.

I started radiation on Tuesday. The actual procedure didn’t take very long and you don’t feel a thing. I was in and out of the treatment room in 15 minutes. 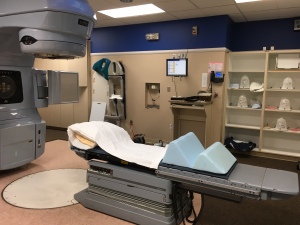 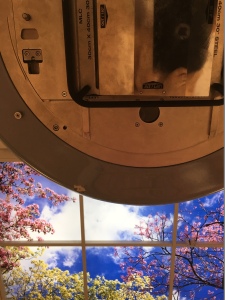 My view of the machine and the “skylight.” It is really just a clingfilm over the lights above. It is a nice touch.

While I was there they drew on me some more. Everything within that area will receive radiation.

Once I was done, I met with my doctor and the nurse as I will once each week. They’ll ask me how I’m doing and check my skin. I have a prescription steroid cream that I apply once a day. I also apply Aquaphor twice a day. It is a thick topical similar to Vaseline. I am also applying CeraVe throughout the day. My oncology surgeon told me that frequently moisturizing will help to prevent/protect against radiation burns. CeraVe lotion is very light and has no perfumes and stuff.

So that is radiation in a nutshell. I’ll try to do updates each week with pictures of how my skin is tolerating it. Right now, so far so good!