My hair is a lot longer than it was a month go. Right now, it looks a little unkempt. It’s almost to the point where I need a cut so it has a style to it.

It is thicker than it was before chemo. However, I think that my hair came back thinner after the previous chemo. So maybe it’s just back to the way it was years ago. It’s also wavier than before. Again, more like the hair I had before, but more like childhood. And it is really, really soft.

This is right out of the shower. Most days I just dry & go.

Playing with a mohawk

I made me laugh

It has some height now 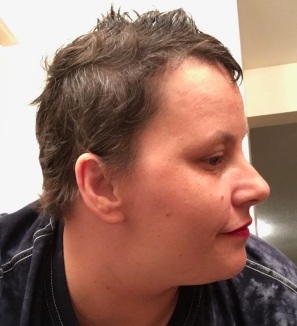 I’m so glad it is coming in so well. To be honest, it was something I was worried about because it was so thin before. Above all, I’m thrilled to have real hair as winter’s getting here. The other nice thing, my hair reminds me of a song from one of my favorite Christmas specials, The Year Without A Santa Claus. Heat Miser was the best. I’m too much!

2 thoughts on “My Hair: Chapter Five”

Writing chick lite to steamy romance with some paranormal thrown in.