My surgery was scheduled for Tuesday July 26th at 11:00am. My oncological surgeon (OC) was to perform a mastectomy and take at least two lymph nodes. The process takes approximately two and a half hours. Then it was my plastic surgeon’s (PS) turn to begin the process of reconstruction by implanting an expander. I discussed all of this earlier. That part of the surgery was going to take approximately an hour. So all told the surgery was to take about four hours.

We got to the hospital at 7:45am because there was some prep stuff I had to do. The procedure to take lymph nodes is technically called, “right sentinel lymph node biopsy with wire location.” This means that before surgery they were to locate, with an ultrasound, the node that they had previously left a clip in. Then, they were to insert a wire as a guide towards the node for the surgeon. However, they were unable to do the wire location for the node for a few reasons. First, lymph nodes are quite deep in the armpit. Originally, the node they had placed the clip in was enlarged, easy to see. Yet, chemo had done its thing and shrunk it back to its normal size. That made it much harder to see. Second, the node they thought might have the clip was too close to the artery, vein, and nerve. The radiologist did not want to chance nicking any of those without being 100% positive that the node they were looking at was the correct node. So we bypassed the wire injection.

However, we did another procedure—Prophylactic Breast Dye Injection (PBDI)—to help the OC detect any lingering cancer. This procedure involves injecting a blue dye with radioactive properties into the breast. The dye is picked up by the lymphatic system. The first node that turns blue is called the sentinel node. The sentinel node, also called the guard node, is the first node that the breast drains into. When the sentinel node is identified, it is taken out and biopsied. The pathologist will test it for any lingering signs of cancer. If it is cancer-free, then the other nodes are not removed. Lymph follows a rigid path, hence the designation lymphatic system. So because the other nodes drain from the clean sentinel, the odds of any of them having cancer are minuscule to none. Before I was taken to the operating room (OR), I was given the PBDI. It stung some, but was not dreadful. After I was given the shot, I was transported to the OR.

When I say “transported,” I bet you imagined a gurney or wheelchair trip down a hall or in an elevator. Well, you’d be partially correct. I was put in a wheelchair, went down a floor in the elevator, wheeled to the front door, and INTO A VAN TO BE DRIVEN BY SECURITY TO THE HOSPITAL OR. 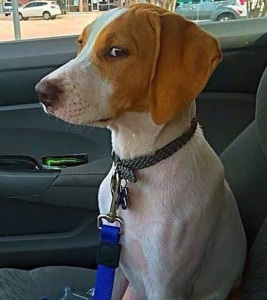 That’s right, the breast center—where I received the PBDI and was to supposed to have a wire placed into my armpit—was located in an entirely separate building than the hospital. To be fair, I was warned about this as we were finalizing my surgery date. But seeing it in action let me know how truly ridiculous that system really is. If a person is already feeling scared and overwhelmed then that drive between buildings has a chance of making it so much worse. Thankfully, I am the kind of person that takes things as they come and just deals with it.

Okay, I “deal” with medical type stuff. Other things I can be a complete asshole about.

Back to surgery. I made it to pre-op at 9:30am. They begin with taking vitals, such as temperature, weight, blood pressure, etc. If you are a female that has any chance of getting pregnant then they administer a pregnancy test. Then they hook you up to an iv and start a saline drip. From that point, it is a whole lot of waiting and watching nurses do paperwork. They flip through pages in a binder, release the clips and pull one or two out, put stickers on the pages or write notes on them, put the pages back in the binder, and then flip some more. You might get asked a question or two. However, it is mainly just you waiting in a gown, wondering what is in that surprisingly thick binder, and feeling boredom overtake your nervousness.

At 10:45am—remember I was suppose to be in the OR at 11:00—a nurse came in to let me know that my OC was running late. An hour and a half late. I was irritated because I hadn’t had anything to eat or drink since midnight. I told them so (very nicely as it wasn’t their fault) and said I was going to nap so I didn’t focus on my thirst or every stomach rumble. I couldn’t really be angry at the delay. I had no idea what kind of surgery the person before me was having or if there were any complications. All I knew was that an oncology surgeon was having to spend more time with a patient. I quietly sent good vibes their way as I drifted off to sleep.

When I woke up, it was 1:00pm. The OC was still in surgery, but they were coming in to give me procedure for a sedative that needed time to do. This procedure is called a paravertebral block. Essentially, a very thin needle is inserted into the spine in order to numb a specific segment of the body. First, the anesthesiologist mapped out the various spinal segments with a pen. Then, assisted by an ultrasound machine, he placed the needle in the appropriate nerve segment. I was given a sedative in my iv before he stuck me. I’m not exactly sure why as the shot didn’t hurt that much. However, that sedative made me way woozy. That was when I decided that I wasn’t hungry or thirsty, sleep was my destiny, and that surgery wasn’t a big deal.

The next time I was totally aware of anything around me, it was 9:30pm and I was in my hospital room. I have no memories of the operating room or post-op. I have three quick memories but I have no idea of when or where they happened. First, I remember my husband kissing me. No idea if it was when I was heading into surgery or in the middle of moving rooms. To be honest, it’s probably both. After 21 years, he still thinks I’m cute.

The second thing I remember is someone telling me to “scoot over.” I assume this was someone directing me to move from one bed to another. The only reason that I do is because they needed me to help move myself from gurney to table when I got my port put in. Finally, I remember someone putting an oxygen mask over my face, me turning my head trying to shake them off, and then someone saying, “Come on Tasha. Take a breath.” I no longer have to wonder when this one happened as my doctor told me it was during recovery. Apparently, I was pretty funny because I did what I was told, but was obviously quite irritated by it.

Anyway, I kept drifting in and out of sleep for the next few hours. I’d wake up to have a sip of water, kiss my husband, ask him if he was okay, and take my pain pills. My husband finally gave in to exhaustion around 2:00am and said he was going home for a nap. (There was no way he could just nap at the hospital.) I told him that he had certainly put in enough hours (19!) and needed the rest. He went home and I slept until 4:00am.

When I awoke at 4:00, it was the first time that I wasn’t groggy. I stayed up for a whole hour! I played on my iPad, flipped through the t.v. channels, looked at the menu to plan what I was going to eat for breakfast. Dozed back off around 5:00am. I woke back up at 6:00am when my OC came around to check in. She had spoken with my husband after the surgery, and understandably, had not had a chance to talk with me until the morning. She was very pleased with how the incisions looked. She told me that nodes taken looked like they were cancer-free. Also, she check the margin around my nipple, did not see any indications of cancer, and did not remove it. We had to wait for my pathology report, but at that moment I had been able to keep my nipple and appeared cancer-free! That was the best news!

My PS came in around 7:00am. He also said that my incisions looked clean. He explained that he had placed Jackson-Pratt drains in the wound site and that I was going to need to take care of them and record it in a chart. The drains were pretty simple and easy to care for. 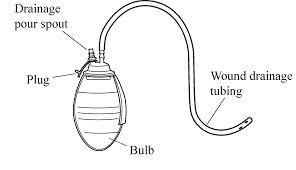 With both doctors declaring that I had fine looking wounds, I was cleared to leave the hospital that day. So I ate some breakfast and waited for my prescriptions and my discharge papers. Once I had those in hand, I got into a wheelchair and was wheeled down to my husband’s car.

I have been home for a week. In some ways this surgery has been less painful than my port surgery. I think it’s because the port for the first few weeks always felt like it was pulling on the vein in my neck and there is no medication for that. This time I have been sore, but not in agony, and the meds help ease the pain. I have Oxycodone for the pain and Valium for muscle spasms. That’s probably the main reason that it has taken me six days to write this post. 🙂

I saw my OC on Monday and got my pathology report. I had a complete response! That means that there was no evidence of disease (NED) anywhere. As of this moment, I AM CANCER FREE! I still have work to do. I’m not sure if I will have radiation yet, but I still have a fair amount of reconstruction ahead of me. However, at least this week, I am just going to be happy.